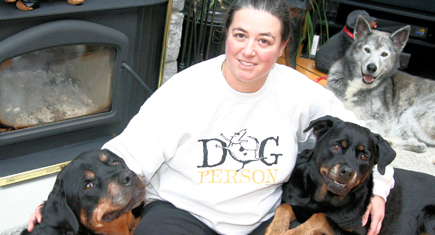 Debbie Moffat is Founder/CEO of Keshet Kennels/Rescue. Debbie has a strong business experience having been the President of EDUCOM, an enterprise software company for 9 years. Before it sold to a US based company in 2004, Gartner announced that EDUCOM was the leader in its market. The year the company was sold, Debbie was recognized by the CATA (Canadian Advanced Technology Alliance) when they presented her with the Sara Kirk Award.

Over the years, Debbie has taken numerous dog training courses. Her love of dogs predates her memory! There are endless family stories of Debbie bringing home litters of abandoned dogs, found in cardboard boxes on the streets of Kobe (Japan). They already had two pets, so she became responsible for finding homes for her foundlings. Her mom consoled her by saying she could have all the dogs she wanted when she grew up and was on her own.

It took time for her mom’s forecast to come to pass, and then only in an on-and-off manner. While attending University in the USA she couldn’t have pets, but when she moved to Israel she was able to acquire four big dogs. Then, when she married and moved to Ottawa they lived in a pet-free apartment for 10 years before buying a home with an abundance of land outside of the City.

Now she could indulge herself to the fullest of her childhood fantasies! Within a single year their family had grown by ten Rotties and Akitas, of which four were ‘rescues’. The die was cast and the pattern set!

Her commitment to establish a rescue centre for large breed dogs grew from a single, disturbing incident. A six-month old Rottie was brought to her door before she was in a position to accept the puppy. Debbie requested that the the pup be put into ‘The System’ with the agreement that she would take the dog after the customary three day holding period. During the three days Debbie arranged facilities for the little Rottie – but when she called for the beautiful puppy, she was told it had already been put down!

Thus, the concept of Keshet Kennels/Rescue was established – to provide facilities, services and training in support of all large breed dogs.