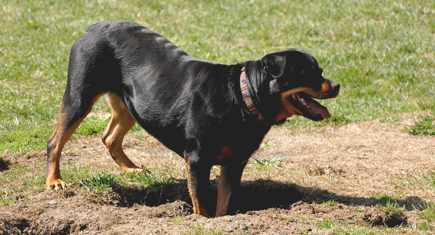 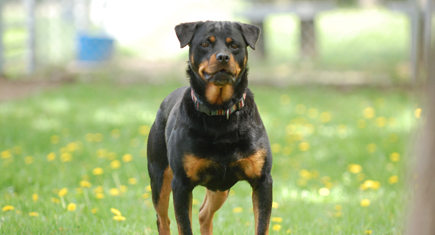 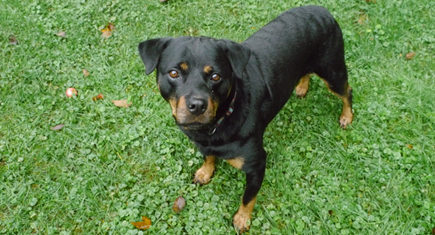 You had a beautiful smile,

And, hung around for a while.

But, shy and afraid

Is the way you had stayed.

Only, on a rare chance,

We shared more than a glance.

When you’d make your fears scuttle,

And come in for a cuddle.

My name is Blue and indeed it could be said that I started my life “marked in low spirits”. I don’t know how or why, but it was evident from the day I was born, that I was very different from my littermates: to the extent that I was never registered alongside of them as the purebred Rottweiler that I am.

What can I say, I was so timid I was afraid of my own shadow. Once all my siblings had gone and I was weaned from my mother, I was paired off with Zeppelin; so as not to be left alone and in the hope that I gain some self confidence. She quickly became my guardian, my best friend, my strength. But one day, out of the blue (no pun intended), I heard that Zeppelin was going to be moving away. My prospects looked grim unless I was able to move with her. Thankfully, that was to be the case.

I was so focussed on my timidness and dependance on Zeppelin that I did not realize that I was infected with heartworm: a condition, unfortunately, that Zeppelin shared with me. Nor did I realize that I had a torn anterior cruciate ligament (ACL), in my back right knee – and possibly even on the left. So it went without saying that I would be seeing a lot of the inside of an operating room. Not to mention the visit for my spay!

When we first arrived at our new home, we must have appeared to be quite the odd couple. Zeppelin was a big female and, although stocky, I am built low to the ground.

Given the lengthy recovery process from my various surgeries, I remained low key for many months. As for gaining confidence, I had lots as long as I could hide behind Zeppelin!

But honestly, although I still have a ways to go, I have made big strides towards strengthening my mental state. And physically, my knees have made a 100% recovery…. and without having to operate on the second leg! Once the right leg was repaired, and I stopped over compensating with the left, it healed on its own. Today, to see me run, you would never know I had ever had a problem.

HOW TO BECOME A SPONSOR