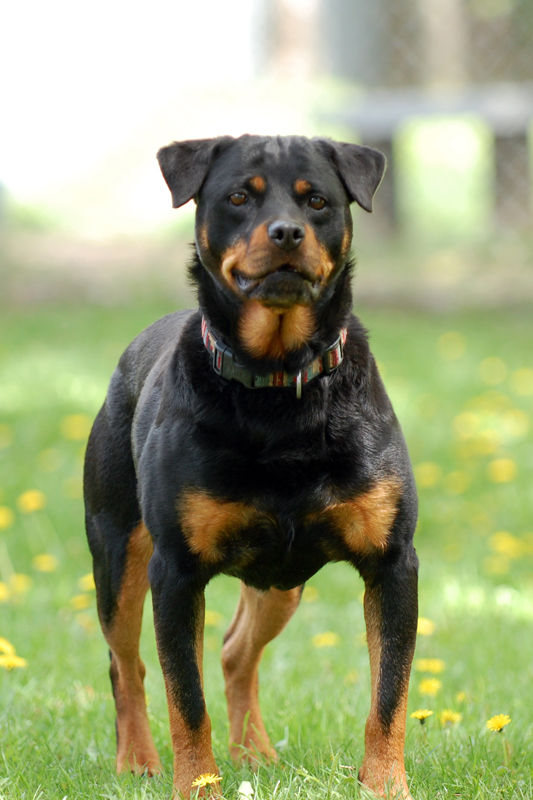 Blue, our now 10 year old Rottweiler, arrived in our care in September 2007. When Blue came into our lives, she required a lot of love and medical attention. Her fear of human touch was so overwhelming, it often prevented her from experiencing all we had to offer.  Blue came to us with Heartworm which needed to be treated before she could undergo any of the surgeries she required.  Blue needed surgery on a torn ACL, a constant cause of discomfort, as well as a routine spay. In order to reduce the stress she would endure at the vet, we believed it was in Blue’s best interest to have both surgeries done at one time. The treatments were intensive but she responded well and, over time, her confidence and trust in humans began to grow. Small in stature but big in personality, it took Blue about 2 ½ years to overcome her extreme timidness and, despite minor setbacks, has never lost her joie de vivre and that true Rotti smile.

In 2012, we discovered that Blue’s blood test was positive for Lyme. This caused us a great deal of concern. Blue had made so much progress and it seemed like this would be yet another obstacle for her to overcome. Admittedly not knowing much about the disease, we needed to get some important questions answered.

Lyme Disease: Lyme disease is the most commonly transmitted tick borne disease in North America. Lyme is more treatable and, overall, less harmful to dogs than humans. In fact, dogs rarely exhibit any symptoms of Lyme disease. If a dog contracts Lyme and it is left untreated for some time, the dog may develop any number of symptoms. Symptoms may differ on a case-by-case basis but typically include stiff gait, fever, muscle and joint stiffness and often don’t show up before 2-5 months.

Dogs typically respond well to the regime of antibiotics used to treat the disease. The most commonly used antibiotic is Doxycycline which acts to sterilize the adult bacteria, preventing them from reproducing. Occasionally, antibiotics can be hard on a dog’s digestive system and may result in vomiting, diarrhea, or both. Provided the dog is healthy, their immune system will respond by killing off the adult bacteria. Lyme disease is not contagious and there has not been any significant evidence to suggest that it is transmitted genetically.

Due to a rise in documented cases of Lyme disease in our area, and based on our veterinarian’s advice, we added the Lyme vaccination to our list of annual vaccines. In order to kill the bacteria and decrease the level of antibodies in her blood, Blue was started on a daily dose of Doxycycline for a duration of one month. There is a good possibility that Blue will carry the antibodies throughout her life, as is typical in most cases. Prompt medical treatment and regular testing both go a long way to ensure she stays Lyme free.

For more information on Lyme disease, check out An Overview of Lyme Disease in Dogs by Cornell University’s Baker Institute for Animal Health.