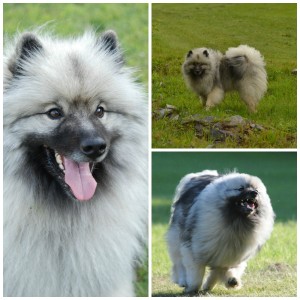 The ‘Smiling Dutchman’. An appropriate name for an intelligent and outgoing breed that loves nothing more than to be a part of family activities. The Keeshond (pronounced ‘Kayz-hond’) is a member of the Non-Sporting breed group. More specifically, they are in the Spitz family and although they share similar characteristics with other Spitzen, they are very different in lineage and history.  The origin of the Keeshond, as we know it today, dates back to the late 1700’s. They were bred in the Netherlands as watch dogs and companions for those on board ships that carried cargo along the Rhine River.

This delightful breed is well known for their luxuriously thick coat, beautifully plumed tail and expressive, fox-like face. Keeshonden are generally very good with children and strangers. In fact, they are great alert dogs as they sound the alarm with loud barking but, because of their friendly nature, often make poor guard dogs.

This sure-footed, energetic breed is a great contender for obedience and agility competitions. Some have even been used as guide dogs or service dogs. Their eager-to-please personality, combined with their intelligence, means this breed is easily trainable. However, several Keeshond enthusiasts insist that training must be started at a young age in order to curb nuisance barking.

It has been stated that this good-natured breed bonds closely with all members of the family unit and lives for attention and affection. In our experience, the Keeshonden we’ve met so far have indeed lived up to this standard.