One cannot tell Damien’s story without mentioning his former canine companion, Emma. Emma, estimated to be 13 years old, was a female Rottweiler with a fairly traditional Rotti look.  Damien, estimated to be at least 7 years old, is a tall, broad, Rottweiler with a tail. Damien and Emma, although never confirmed, were believed to be mother and son. Both dogs were enormously dependent on each other and did not seem to cope well when separated. The pair was unable to share the small pen at a shelter after they were confiscated from a home in Timmins due to neglect, and were placed in a foster home until space became available at Keshet.

Damien and Emma arrived in our care on Dec 1, 2013. It was clear upon their arrival that a weight loss and exercise program was to be implemented without delay. Damien was a little more outgoing than Emma, but age and overall health may have been an influencing factor. Emma’s health began to deteriorate in February as she was battling respiratory infections, arthritis and several other age related ailments. With her mobility, demeanor, and immune system compromised, Emma passed in February 2014. Damien was on his own for the first time in his life.

We were unsure of how Damien would cope with losing his lifetime companion but, after about a week, we noticed he was starting to come out of his shell. He showed interest in toys and balls and became fast friends with one of our other rescued female Rottweiler’s, Stash. By all accounts, Damien was doing great.  His weight loss regime was proving successful and, over the span of 4 months, managed to lose 23 lbs. He loved the extended daily nature walks and even starred in a few instructional TTouch videos. 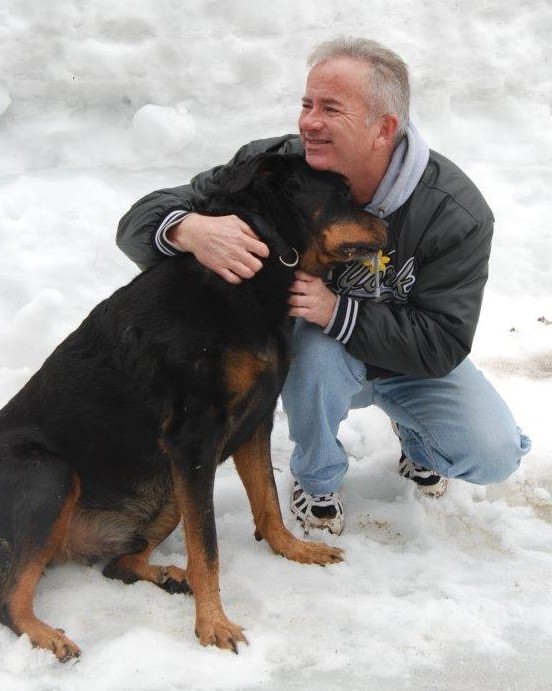 When dog’s come into our lives, it’s never easy to see them go. Emma will always be remembered for her loving and gentle disposition but we can’t help but think, in some small way, her passing was a blessing in disguise. At times, Damien was nervous and protective of Emma but with her passing, he was able to form new relationships and experience new things.

Damien was fortunate enough to find his forever home and was adopted on April 17, 2014. He is doing great and adjusting well to his new life. We were blessed with the opportunity to facilitate a home for this wonderful dog. We wish Damien and new parent, Dean, all the best for the future.