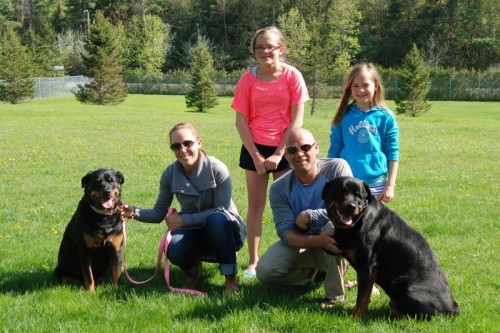 Enzo with his forever family

Enzo was adopted into our care in early March 2013. From the moment he arrived, it was clear to us that he was a special guy. He was a stunning boy with a great personality to match. Both his size and bark were impressive and he dwarfed the stocky Rottweiler’s that we had grown accustomed to handling every day. Enzo shared the same lineage as some of our other rescued Rottweiler’s and became a great companion for his cousin, Misty.

The saying “all things happen for a reason” was never more true than in Enzo’s case. When the Laporte family set out to find a companion for their Rottweiler Mia, their interest was immediately peaked when they came across Enzo’s profile. After noticing that Enzo and Mia shared the same birthday, they decided to investigate further. As it turns out, Enzo and Mia are long lost littermates that have since been reunited. Enzo’s adoption was made official on May 19, 2014. Whether it was fate, fluke or fortune, things are off to a great start and we wish them all the best.

One response to “Happy Tails: Enzo Finds His Forever Home”