Littermates: Bonded One Day, Broken The Next 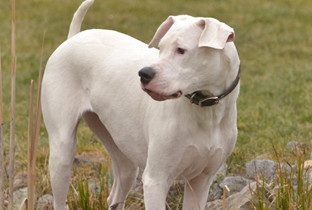 Diamond and Cayenne are 4 1/2 year old Dogo Argentinos (Argentinian Mastiffs) that came into Keshet’s care in November of 2014. As littermates, these two sisters have lived together for most of their lives. Many of us have heard stories about dogs that were once bonded but had suddenly turned on one another, and that female dogs are notorious for holding grudges. It’s not that we didn’t believe what we had heard but, rather, couldn’t really relate to the stories – that is, until recently.

Cayenne is deaf and we originally thought that she would have been dependent on Diamond, especially after moving into an unfamiliar environment. We quickly determined, however, that this wasn’t the case. Diamond was not exactly dependent on Cayenne, but was definitely the more submissive of the two. She rarely sought to venture off without her sister by her side. Nonetheless, the girls had a seemingly good relationship with each other. That is not to say that we hadn’t noticed the occasional low growl from one or the other. Especially if we ever inadvertently paid more attention to one, even for just a moment. It didn’t seem at the time like anything to be concerned about, we’ve seen this behaviour with the two sisters from day one. It was always just a quick verbal correction or hand gesture and everyone would carry on as normal.

Recently, the girls got into an altercation. Not ready or wanting to completely separate these two from each other, we wanted to see if the girls could work out their differences. Throughout the next several weeks we tried re-introducing them using a number of different techniques, tools and trainers’ advice. Despite our efforts, Cayenne seemed to be holding a grudge. Every session would result in the same thing, a lot of posturing, growling, hackling, and intense eye contact. Whatever the feud stemmed from, things were clearly escalating and it wasn’t looking good.

The hardest part about all of this is that Cayenne’s hearing impairment prevents us from being able to communicate with her effectively. Verbal corrections to “rest” or “go easy” are largely unsuccessful. We have been working with Cayenne regularly to teach her to respond to hand signals. She has made some progress but her head-strong nature, which she comes by honestly, makes it hard to keep her focused. The girls would act interested in each other by whimpering for the other, wagging tails, and licking each other’s face through the fence.  However, once they came close to one another without a fence separating them, Cayenne would become aggressive. It got to the point that any time Diamond was around, Cayenne was locked on and ready for action. 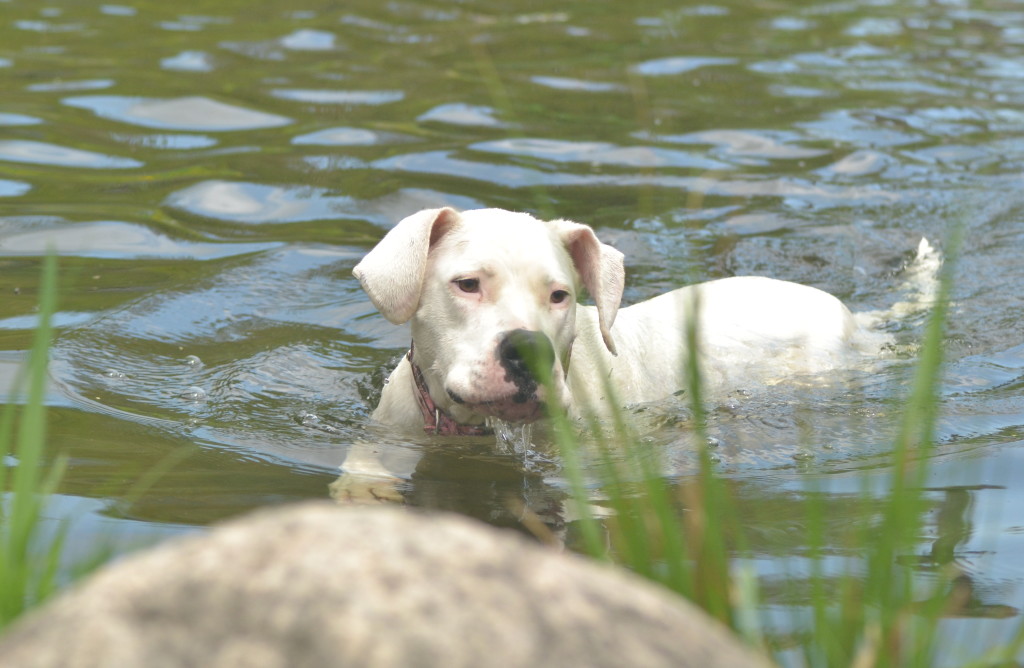 It had become clear that putting Cayenne and Diamond back together for any amount of time would be a danger to both.  In their best interest, the girls now lead separate lives. The fact that our Dogo girls no longer get along with each other has in no way affected their relationship with people. They are the same sweet, loving, mild-mannered, couch potatoes they always were.

As unfortunate as this rift between them seems, it has had some positive impacts on their lives. Diamond, the more dog-friendly of the two, will have opportunities to explore relationships with other fur-buddies and gain self-confidence. Cayenne, who is not so tolerant of other dogs, has more opportunities to soak up all the love and has even revealed her passion for swimming.

We consider ourselves fortunate that there was a silver lining in all of this. Originally, we were concerned that the girls would not adjust well to life apart from one another. They are proving in many ways that life is good, maybe even better, apart from one another. As much as we wanted them to live together, the truth is that it’s never about what we want. It’s about doing whatever is in the dog’s best interest.