Nitchi, our 13 year old Akita, passed away on February 9, 2015. Being an older dog with typical age related ailments, arthritis and hip dysplasia, we knew every day we had with Nitchi was a blessing. Nevertheless, we were totally unprepared for her sudden passing on the afternoon of the 9th. The day started off like any other and Nitchi completed her daily routine without issue. However, things had changed by late afternoon as she had suddenly taken a turn for the worse. The rapid onset of symptoms suggested something serious and, unfortunately, Nitchi passed away while on route to the vet. 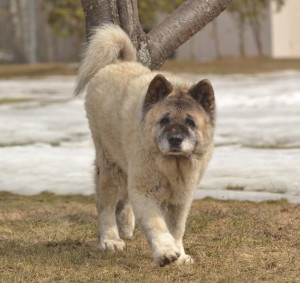 It was later discovered that Nitchi had succumbed to a condition called Gastric Motility Disorder. This disorder affects the natural peristaltic (involuntary, wavelike) movements of the digestive tract. Primarily, the normal movement of the stomach ceases and the stomach contents are not able to be broken down and moved into the small intestine. As a result, the stomach is not able to rid itself of the gases, acids and bacteria that are crucial to healthy gut flora which normally move through the digestive system.  The sudden onset of this condition often causes a buildup of gas in the stomach that cannot be expelled, resulting in a secondary and sometimes fatal condition known as bloat. This bloating is exactly what happened to Nitchi and, although the bloat was responsible for the majority of her issues, the condition seemed to burden the rest of her body resulting in multiple organ failure. 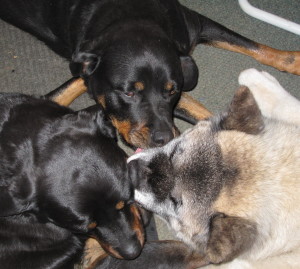 Although Gastric Motility Disorder has a higher level of occurrence in senior dogs, all ages and breeds may be at risk. There are several different types of motility disorders, many of which can be diagnosed through the use of X-Rays and ultrasounds. If diagnosis of mild-moderate motility disorders are caught early, the condition can usually be managed through special diets, frequent small volume meals and medication. Symptoms of this disorder are usually related to the digestive tract and may include chronic vomitting (especially after meals), loss of appetite, lethargy and ingestion of inedible objects (known as pica). In the days and hours before Nitchi took ill, she hadn’t exhibited any of these symptoms which we believe could have alerted us to a bigger issue. Unfortunately for Nitchi, a number of factors came into play that day and the outcome proved too much for her aging body to cope with.

From her first day with us, Nitchi was a people-oriented dog. She was always most interested in what people around her were doing and never missed an opportunity to join in. She lived a good, long, happy life and, even in her passing, was surrounded by people that loved and cherished her.