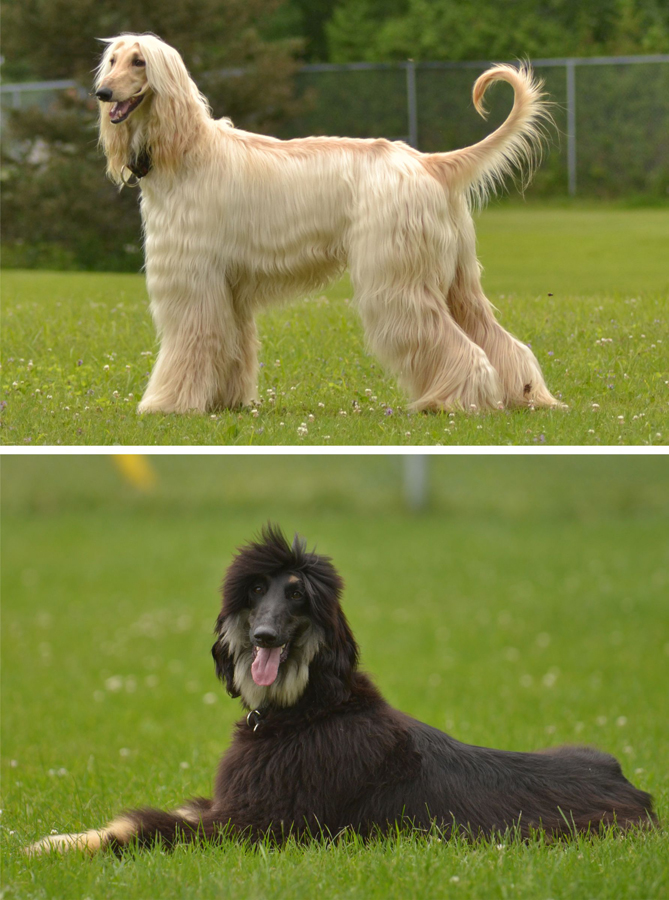 Mr. Zee & Miss Gracie during a visit to Keshet

Renowned for their flowing, silky coats and distinctive appearance, Afghan Hounds are a formidable breed with a long and fascinating history. The combination of their unique look, confident gaze, and long, powerful strides, give the Afghan Hound an air of nobility or aristocracy. If truth be told, many enthusiasts actually describe Afghans as an intelligent and comical breed that can be, at times, stubborn and aloof.

Afghans are members of the Sighthound (a.k.a Gazehound) group. Sighthounds are a subclass of the Hounds Group and have some interesting differences when compared to their Scenthound counterparts. Sighthounds differ slightly from other breeds of hounds because they depend on eyesight, speed, and agility to chase and capture their prey as opposed to scent and endurance. Sighthounds are also unique in physical build and body proportions when compared to other hounds. The overall shape of their skull, and placement of their prominent eyes, serves them well when chasing down prey as it helps to increase their field of vision. The Sighthounds’ lean, wiry build is designed to keep their weight at a minimum, and the deep chest cavity provides room for a large heart and lungs. These enlarged organs work efficiently to supply the body with the oxygen rich blood needed during physical exertion.

Mentioned several times in Egyptian papyrus and depicted in the early caves of Northern Afghanistan, Afghan Hounds are an ancient breed that have been around for thousands of years. Afghans originated in the cold mountainous regions of Afghanistan where they were bred and used to hunt down predators for the purpose of guarding sheep and cattle. Despite their dignified appearance, Afghans have been known to hunt or chase away deer, foxes, wolves, and even leopards. It has been stated that early breeders wanted to keep their dog’s lines pure which meant that the exportation of Afghans was prohibited. The breed only reached Europe after it was imported as contraband in the early 1920’s and, later, made their way to North America. Today’s Afghans are seldom used for hunting or herding but the independent nature of the coursing hound within them remains ever-present.